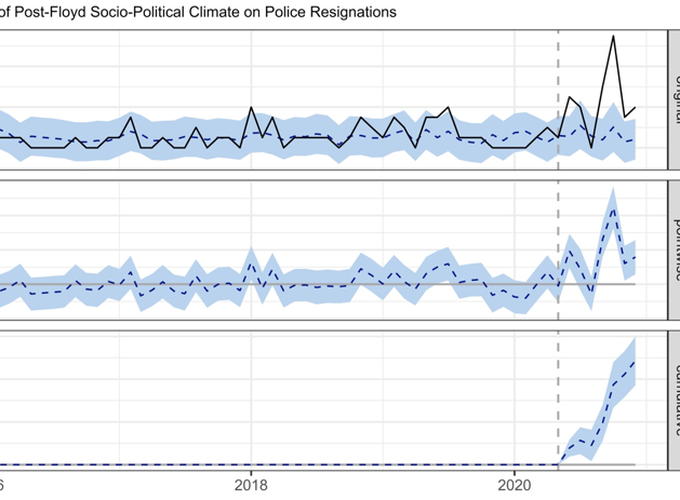 Several of the largest U.S. police departments reported a sharp increase in officer resignations following massive public protests directed at policing in the summer of 2020. Yet, to date, no study has rigorously assessed the impact of the George Floyd protests on police resignations. We fill this void using 60 months of employment data from a large police department in the western US. Bayesian structural time-series modeling shows that voluntary resignations increased by 279% relative to the synthetic control, and the model predicts that resignations will continue at an elevated level. However, retirements and involuntary separations were not significantly affected during the study period. A retention crisis may diminish police departments’ operational capacity to carry out their expected responsibilities. Criminal justice stakeholders must be prepared to confront workforce decline and increased voluntary turnover. Proactive efforts to improve organizational justice for sworn personnel can moderate officer perceptions of public hostility.

There’s been a lot of talk lately about a staffing crisis in policing following the George Floyd protests last summer. Minneapolis, Portland, San Francisco, Chicago, New York City, and Seattle all saw increases in police resignations and/or retirements in 2020. According to PERF’s recent survey of 194 agencies, resignations increased 18% and retirements increased 45% in 2020-21 (relative to 2019-20).

Scott Mourtgos, Ian Adams and I have a forthcoming article in which we show that resignations in a large western agency1 spiked 279% (relative to a synthetic counterfactual) following last summer’s protests. However, there were no significant changes in retirements or involuntary separations during our 60-month study period. Here are the yearly counts for each:

Probabilistic forecasting models predicted elevated resignation rates would continue in this agency in the months ahead. This is concerning, since it takes approximately one year for newly hired officers to become “road ready.” Even if this agency could recruit and hire ~30 officers to replace those who resigned, in the meantime they’d continue to lose ~5 officers per month to new resignations, resulting in a continuing net loss. So if our forecast model is accurate, this agency will need to hire well ahead of their authorized size in order to increase staffing. 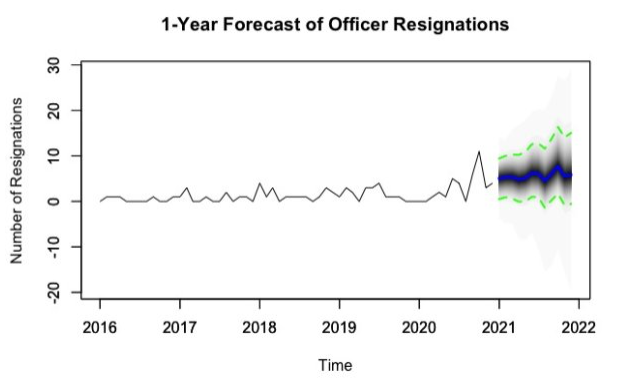 Click on the PDF button at the top of the page to download the full text. Feedback is always welcome!